UN Special Rapporteur on the Right to Freedom of Opinion and Expression, David Kaye, is joined in conversation by Nani Jansen Reventlow, a Fellow at the Berkman Klein Center and Adviser to the Cyberlaw Clinic, about his thematic report on digital access and human rights, as well as the most burning issues regarding free speech online and digital rights including encryption, fake news, online gender-based abuse and the global epidemic of internet censorship.

The Special Rapporteur also speaks about his work in both national and international free speech cases, after which the audience asks questions.

This event is co-sponsored by The Human Rights Program at Harvard Law School and the Berkman Klein Center for Internet & Society at Harvard University.

David Kaye, a clinical professor of law at the University of California, Irvine, is the United Nations Special Rapporteur on the promotion and protection of the right to freedom of opinion and expression, appointed by the UN Human Rights Council in June 2014. His rapporteurship has addressed, among other topics, encryption and anonymity as promoters of freedom of expression, the protection of whistleblowers and journalistic sources, and the roles and responsibilities of private Internet companies. Early in his career he was a lawyer in the U.S. State Department, handling issues such as the applicability of the Geneva Conventions in the wake of the attacks of September 11, 2001. His academic research and writing have focused on accountability for serious human rights abuses, international humanitarian law, and the international law governing use of force. A member of the Council on Foreign Relations and former member of the Executive Council of the American Society of International Law, he has also published essays in such publications as Foreign Affairs, The New York Times, Foreign Policy, JustSecurity and The Los Angeles Times.

Nani Jansen Reventlow is an Associate Tenant at Doughty Street Chambers and a 2016-2017 Fellow at the Berkman Klein Center for Internet & Society at Harvard University. She is a recognised international lawyer and expert in human rights litigation responsible for groundbreaking freedom of expression cases across several national and international jurisdictions.

Between 2011 and 2016, Nani has overseen the litigation practice of the Media Legal Defence Initiative (MLDI) globally, leading or advising on cases before various national and international courts. At the Berkman Klein Center, Nani's work focuses on cross-disciplinary collaboration in litigation that challenges barriers to free speech online. She also acts as an Advisor to the Cyberlaw Clinic. 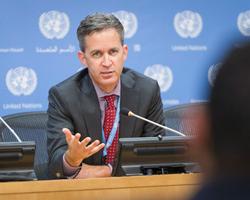 The social media have been accused of contributing to everything from terrorism to genocide. They have also been the only space in which activists and journalists at risk are…