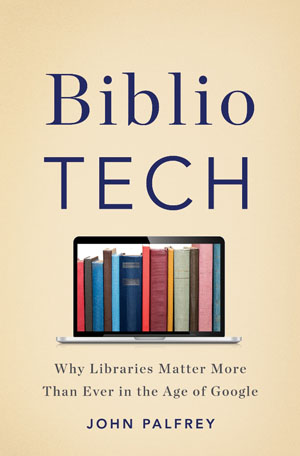 John Palfrey will discuss his new book, BiblioTech: Why Libraries Matter More Than Ever In An Age of Google.  He argues that anyone seeking to participate in the 21st century needs to understand how to find and use the vast stores of information available online.  Libraries play a crucial role in making these skills and information available — and yet are at risk. In order to survive our rapidly modernizing world and dwindling government funding, libraries must make the transition to a digital future as soon as possible—by digitizing print material and ensuring that born-digital material is publicly available online, while continuing to play the vital role as public spaces in our democracy that they have for hundreds of years.

John is the Head of School at Phillips Academy, Andover.  He serves as Chair of the Board of Trustees of the Knight Foundation and President of the Board of Directors of the Digital Public Library of America.  He also serves as a director of the Data + Society Research Institute.

John’s research and teaching focus on new media and learning.  He has written extensively on Internet law, intellectual property, and the potential of new technologies to strengthen democracies locally and around the world.  He is the author or co-author of several books, including BiblioTech: Why Libraries Matter More Than Ever in the Age of Google (Basic Books, 2015); Interop: The Promise and Perils of Highly Interconnected Systems (Basic Books, 2012) (with Urs Gasser); Intellectual Property Strategy (MIT Press, 2012); Born Digital: Understanding the First Generation of Digital Natives (Basic Books, 2008) (with Urs Gasser); and Access Denied: The Practice and Politics of Global Internet Filtering (MIT Press, 2008).

John served previously as the Henry N. Ess III Professor of Law and Vice Dean for Library and Information Resources at Harvard Law School.  He is a director of the Berkman Center for Internet & Society, where he was executive director from 2002-2008. John came back to the Harvard Law School from the law firm Ropes & Gray, where he worked on intellectual property, Internet law, and private equity transactions. He also served as a Special Assistant at the U.S. Environmental Protection Agency during the Clinton administration.  He previously served as a venture executive at Highland Capital Partners and on the Board of Directors of the Mass2020 Foundation, the Ames Foundation, and Open Knowledge Commons, among others.  John was a Visiting Professor of Information Law and Policy at the University of St. Gallen in Switzerland for the 2007-2008 academic year.