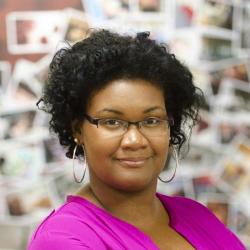 A certified media junkie, Latoya Peterson provides a hip-hop feminist and anti-racist view on pop culture with a special focus on video games, film, television, and music. Skilled in interviewing and creative non-fiction, Latoya Peterson spends her time editing the award winning blog Racialicious.com – the intersection of race and pop culture. She is a Contributing Editor for The Root.com and a former Content Producer for the Online News Association.

Her work has been published in Spin, Vibe, Marie Claire, Essence, The American Prospect, The Atlantic Blog, Bitch Magazine, Clutch Magazine, the Women’s Review of Books, Slate’s Double X, The Poynter Institute, The Root.com and the Guardian. She was a contributor to Jezebel.com. Her essay, “The Not Rape Epidemic” was published in the anthology Yes Means Yes: Visions of Female Sexual Power and a World Without Rape (Seal Press, 2008). She also contributed “The Feminist Existential Crisis (Dark Children Remix)” to the anthology Feminism for Real: Deconstructing the Academic Industrial Complex of Feminism (CCPA, 2011).

As a digital media consultant, Latoya Peterson has worked with brands like NPR, Wikipedia, and Weber-Shandwick to provide demographic analysis, ideas on improving user experience, and specialized outreach. She was also a guest host for WEAA’s Michael Eric Dyson Show and a contributor/substitute digital producer for Al-Jazeera’s The Stream.

Her perspectives have been quoted in Essence, The Boston Globe, CNN, the Guardian (UK), the Austin Chronicle, and Newsweek and she regularly speaks on topics of race, gender, and social media at conferences like Women, Action and the Media and South by Southwest Interactive.

She is currently a John S. Knight Journalism 2012-2013 Fellow at Stanford University focusing on mobile technology and digital access. She was also a Poynter Institute Sensemaking Fellow, and one of the inaugural Public Media Corps fellows.

The Ethics and Governance of Artificial Intelligence Initiative
Sep 26, 2018

In this article, "storyteller and technologist Latoya Peterson explores why all journalists need to be proficient in the technology and how it is developed."