The Berkman Center is pleased to announce the publication of “Mobilization for Change,” a new series of reports examining the role of the networked public sphere in advancing civic participation and collective action in the Arab region. The online space in Egypt, Tunisia, and Bahrain reflects a growingly polarized and contentious offline political environment, with less consensus than existed five years ago. Fieldwork corroborates insights from social network mapping in this regard and confirms the continued importance of traditional political powerhouses as well as offline networks in mobilization. Yet digital media still offer a comparatively open venue for competing perspectives, providing more freedom for individual expression than traditional media in these countries.

The papers combine social network mapping techniques with fieldwork conducted in Egypt and Tunisia to analyze the shape and structure of the networked public sphere in the Arab region. The papers also examine the dynamics between the online and offline spheres and their relative impact on mobilization. The social network analysis is based on a regional map of the blogosphere; maps of Twitter networks in three countries: Egypt, Tunisia, and Bahrain; and a map of the Tunisian Facebook network. The fieldwork is based on in-depth interviews and focus groups with active members of the Egyptian and Tunisian networked public sphere in addition to nationally representative surveys. This mixed methods approach across these different platforms and regions offers a detailed view of social, cultural, religious, and political expression through digital media. Key observations include:

The papers, along with two additional reports examining the project's methods and summarizing the results, are available at arabnps.org.

About Mobilization for Change

Mobilization for Change seeks to understand the complex relationship between the networked public sphere and collective action in the region, with case studies from Egypt and Tunisia. Mobilization for Change is a joint project of the Access to Knowledge for Development Center (A2K4D) at the School of Business at the American University in Cairo and the Berkman Center for Internet & Society at Harvard University. The project is supported by the International Development Research Centre (IDRC). 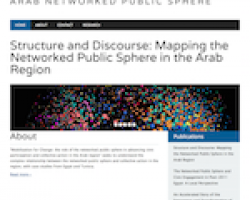 “Mobilization for Change” is a series of reports examining the role of the networked public sphere in advancing civic participation and collective action in the Arab region.