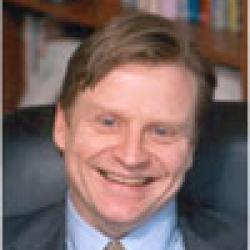 Archived Biography: James F. Moore is an expert in leadership and change in large scale social, economic, and technical systems. His current projects include:

2. Maintaining an ongoing action-research study of the Internet and political and social change, focusing on the role of citizen participation and new forms of interactive media.

3. Completing a three-year action-research study of "digital development" in Africa, examining the relationships among entrepreneurs, technology, law and public policy.

4. Continuing a twenty-year participation in the evolution of the computer and communication sector, with primary concern for innovation, business strategy and leadership, industry structure, and the role of volunteerism and popular movements such as Open Source Software. Currently Jim is engaged with the development of so-called "top level" media sharing using RSS and related technologies to create personal media networks and new types of groups and communities.

Jim became a Senior Fellow at HLS' Berkman Center in the spring of 2000. He founded the Open Economies Project (funded by Hewlett-Packard) and worked to bring the attention to the legal dimension of technology and economic issues in the developing world. In 2003 he helped co-teach the school's Digital Democracy course, as well as an online seminar on law, technology and economic development.

Jim served on a number of public-private initiatives to bridge the global digital divide. Jim was a member of the United States Delegation to the G-8 Group of Nations' Digital Opportunity Task Force. He was the first Chair of the Board of Hewlett-Packard's business unit serving the rural poor, HP World e-Inclusion, and was a member of the United Nations & Markle Foundation Global Digital Opportunity Initiative, and of its e-strategy consultation to the South African government.

Jim is a private investor involved in the venture capital business, and has served on the boards of several companies and organizations, including two public companies. He is the founder and former Chairman and Chief Executive Officer of GeoPartners Research, which he led from 1990 to 1999. GeoPartners invested in and consulted to companies whose strategies required change in large scale systems, including AT&T, AT&T Bell Laboratories, Intel, Intel Capital, Hewlett-Packard, Softbank Group, Qualcomm, Motorola, Johnson & Johnson, Jim Henson Productions, GE Capital, and Royal Dutch Shell. Jim pioneered the concept of "business ecosystems" as a way to communicate about systems evolution and business strategy. This term and associated analytical approaches are widely used for strategy-making and venture investing in the high tech sector.

Jim authored a best-selling book, The Death of Competition: Leadership and Strategy in the Age of Business Ecosystems (HarperBusiness, 1996). The Wall Street Journal awarded the book five stars and selected it as one of the top books for entrepreneurs published this decade. His earlier Harvard Business Review article "Predators and Prey: A New Ecology of Competition" won the McKinsey Award for best article of 1993. Jim's writing has been published in a variety of periodicals ranging from Foreign Affairs to The New York Times, Fortune and Fast Company. For many years Jim authored a regular column in Upside, the original Silicon Valley technology business magazine.

In the spring of 2003 Jim wrote The Second Superpower Rears its Beautiful Head which explores how citizens worldwide might join through communications technology, engage international institutions, and become a transnational "second superpower" to dialogue with governments and help set global policy. Many interesting questions are raised in the process of exploring how to make this admittedly far-flung idea real. How can we best use the Internet and other communications media to promote global citizen participation? How can the relationship between global citizens and international institutions be expanded and made more effective? What is the role for "emergent democracy" and NGOs and other citizens' groups in shaping society? Jim was honored by the 4th World Forum on e-Democracy as one of the top 25 individuals, organizations and companies that are having the greatest impact on the way the Internet is changing politics, for the publication of this paper. In the Winter of 2003, 2004 Jim served as Director of Internet and Information Services for the Howard Dean campaign for US President, a campaign that innovated many new approaches to the use of the Internet for large-scale political communication and organizing.

Jim earned a doctorate in Human Development (clinical developmental psychology) from Harvard University in 1983, where he conducted research on the cognition and expert practice, and worked closely with C. Roland Christensen, one of the founders of modern business strategy. Jim continued his research as a Post-doctoral Fellow in Organizations at Stanford University in 1983-84, and as a Senior Research Associate at the Harvard Business School in 1984-85. He attended Williams College (Massachusetts) and earned his undergraduate degree from The Evergreen State College (Washington) in 1975.

Jim contributes time to initiatives in the human rights and global health and economic development arenas. Jim is an active supporter of the Harvard School of Public Health, a former Chair of its Advisory Board on Society and Health, and a member of the International Advisory Board of the Harvard AIDS Institute, which works primarily with AIDS in Africa. He is a member of the Leadership Council of Amnesty International USA.