Skip to the main content
Washington, DC - The findings of an international study released today by researchers from the Berkman Center for Internet & Society at Harvard Law School and the Research Center for Information Law, University of St. Gallen indicate that private sector leadership, more so than government intervention, is the optimal method for ensuring that technologies work well together and innovation flourishes. The authors of"Breaking Down Digital Barriers: When and How ICT Interoperability Drives Innovation" found that interoperability is generally good for consumers and drives innovation, but determined that there is no "silver bullet" solution to the issue.

Interoperability has increasingly become more important because computer users -- whether they be consumers, businesses, or governments -- now tend to obtain hardware and software from different vendors and expect everything to work together. One approach to the issue that has received attention advocates government-mandated adoption of specific technologies to compel interoperability. This study suggests that such approaches are unlikely to be the optimal approach to interoperability.

"Interoperability leads to innovation and many benefits for consumers," said co-principal investigator John Palfrey, Executive Director of the Berkman Center for Internet & Society. "The case studies we investigated produced clear conclusions: The ICT industry is achieving considerable interoperability every day in response to the needs of customers. There is often more than one way to achieve interoperability. Market-driven initiatives tend to provide the most long-term promise."

"This research demonstrates that there is no standard application to achieve ICT interoperability," said Urs Gasser, co-principal investigator and Director of the Research Center for Information Law. "Attempting to impose universal answers can produce unintended consequences such as curtailing innovation, limiting consumer choice and reducing competition. Instead, each situation needs to be analyzed on its own, to determine the best way to achieve interoperability. Nor can we forget that interoperability is simply a means to larger and more important goals, such as consumer choice, access to content, ease of use and diversity."

* The research focused on three case studies in which the issues of interoperability and innovation are uppermost: digital rights management in online and offline music distribution models; various models of digital identity systems (how computing systems identify users to provide the correct level of access and security); and web services (in which computer applications or programs connect with each other over the Internet to provide specific services to customers).

The core finding is that "increased levels of ICT interoperability generally foster innovation. But interoperability also contributes to other socially desirable outcomes. In our three case studies, we have studied its positive impact on consumer choice, ease of use, access to content, and diversity, among other things."

* Interoperability does not mean the same thing in every context and as such, is not always good for everyone all the time. For example, if one wants completely secure software, then that software should probably have limited interoperability. In other words, there is no one-size-fits-all way to achieve interoperability in the ICT context.

* Interoperability can be achieved by multiple means including the licensing of intellectual property, product design, collaboration with partners, development of standards and governmental intervention. The easiest way to make a product from one company work well with a product from another company, for instance, may be for the companies to cross license their technologies. But in a different situation, another approach (collaboration or open standards) may be more effective and efficient.

* The best path to interoperability depends greatly upon context and which subsidiary goals matter most, such as prompting further innovation, providing consumer choice or ease of use, and the spurring of competition in the field.

* The private sector generally should lead interoperability efforts. The public sector should stand by either to lend a supportive hand or to determine if its involvement is warranted.

The authors of the study propose a process constructed around a set of guidelines to help businesses and governments determine the best way to achieve interoperability in a given situation. This approach may have policy implications for governments.

* Consider the facts of the situation. The key variables that should be considered include time, maturity of the relevant technologies and markets and user practices and norms.

* In light of these goals and facts of the situation, consider possible options against the benchmarks proposed by the study: effectiveness, efficiency and flexibility.

* Remain open to the possibility of one or more approaches to interoperability, which may also be combined with one another to accomplish interoperability that drives innovation.

* In some instances, it may be possible to convene all relevant stakeholders to participate in a collaborative, open standards process. In other instances, the relevant facts may suggest that a single firm can drive innovation by offering to others the chance to collaborate through an open API, such as Facebook's recent success in permitting third-party applications to run on its platform. But long-term sustainability may be an issue where a single firm makes an open API available according to a contract that it can change at any time.

* In the vast majority of cases, the private sector can and does accomplish a high level of interoperability on its own. The state may help by playing a convening role, or even in mandating a standard on which there is widespread agreement within industry after a collaborative process. The state may need to play a role after the fact to ensure that market actors do not abuse their positions.

The report and case studies can be downloaded at http://cyber.harvard.edu/interop. The research was sponsored by Microsoft Corporation.

The Berkman Center for Internet & Society at Harvard Law School is proud to celebrate its tenth year as a research program founded to explore cyberspace, share in its study, and help pioneer its development. Founded in 1997, through a generous gift from Jack N. and Lillian R. Berkman, the Center is now home to an ever-growing community of faculty, fellows, staff, and affiliates working on projects that span the broad range of intersections between cyberspace, technology, and society. More information can be found at http://cyber.harvard.edu.

The Research Center for Information Law, FIR-HSG, was established in 2000 by University of St. Gallen professors Jean Nicolas Druey, Herbert Burkert, and Rainer J. Schweizer. The research initiatives of the Center are aimed at analyzing and assessing legal frameworks and provisions that are regulating the creation, distribution, access, and usage of information in a given social subsystem such as the economic, cultural or political system; exploring the dynamic changes in information technologies and their impacts on the legal system. More information can be found at http://www.fir.unisg.ch/. 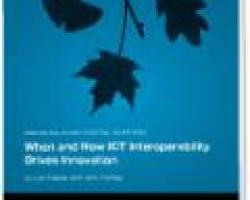 Breaking Down Digital Barriers: When and How ICT Interoperability Drives Innovation

In this study, we have done a deep-dive on three cases - DRM-protected music, Digital ID, and Mashups in the Web services context - as well as cursory reviews of other narratives…