What is Seesmic? "Seesmic is a video blogging web application." [1] Seesmic provides an innovative way to communicate and connect online through video conversation. Users can do this by recording a video directly on Seesmic's website or a mobile phone, by uploading an existing video straight from your computer or by linking to a video posted on a social network. [2]

The Seesmic platform also enables video conversations on more than a thousand sites, blogs and broadcasts them to other social software such as Twitter and Friendfeed thanks to its robust API. Seesmic also operates twhirl, a social desktop client, that now enables Seesmic video comments. twhirl represents 12% of Twitter messages being sent and has over 400,000 downloads. [4]

French entrepreneur Loic Le Meur founded Seesmic to make video uploading easier for those using webcams. Seesmic is backed by a number of investors, the primary one being Atomico, a venture group that includes Niklas Zennstrom and Janus Friis, who sold Skype to eBay in 2005 for $2.6 billion. On April 3, 2008, Seesmic announced that it had purchased Twhirl, an Adobe AIR based Twitter client. [5]

One criticism of Seesmic is that it may be too niche, as only so many people want to broadcast themselves on video. (Though for everyone else there's Twhirl.) http://www.readwriteweb.com/archives/seesmic_growth.php If our purpose for using Seesmic is to get participation from more of the class than we do during class time or from a wider audience, this is something we should consider and a traditional internet forum could be preferable. On the other hand, other factors may make the video format advantageous.

The site has far fewer users than some of the other tools we might consider using. Twitter had 5.57 million users in the year ending in September. [6] Youtube had 22 million users by July 2006. [7]

In an educational setting, some have proposed that Seesmic has some real advantages. Seesmic may be a useful tool when trying to learn a new language, which also includes nonverbal communication. In all contexts, video also allows for communication that is closer to an in-person experience than other formats. [8] [9]

We may want to consider whether these advantages outweigh the costs, those previously mentioned and others not anticipated here, of using Seesmic instead of another tool.

How we are Using Seesmic

The last two groups to present have posted questions for the class and others to consider and reply to before class. One group posted their question in video format, the other in text. Class members and others responded with differently formatted video responses. Some responses consisted of the poster(s) appearing on camera and discussing the issue. Others involved slides, mash-ups of other videos, user created or modified images and others. Some videos were more serious while others included humor.

We discussed briefly the use of Seemic during the optional class meeting on March 30 - but didn't get very far.

We consider the way two groups chose to use the tool. For example, our Seesmic discussions have occurred before the related class discussion. Should we consider having Seesmic conversations after? One team posted the question in the form of a video and the other posted it in text. Was one format preferable to the other?

How does the use of Seesmic compare to our use of other tools? What have we observed about the use of all of these tools that can help other classes going forward, regardless of what tools they choose to use at that time?

This type of tool seemed to be espacially useful for: 1. prompting students to think intelligently about the issues before class, 2. starting the discussion of the isses early, 3. allowing students to use some creativity in expressing their thought, and 4. engaging in discussion with the outside world.

We have a couple of suggestions when using tools like these:

When using tools like these, make sure the prompt is as clear as possible. Because the question is not presented in real time, there seems to be a bigger barrier to getting clarification and confusing prompts can result in confused answers. Using a video to pose the question seemed more effective for communicating the answer as it seemed to allow for more clarification.

Make sure to give plenty of notice to students. The more notice you give, hopefully the more thoughtful responses you will get from busy students.

To view the discussion, visit: http://seesmic.com/threads/bInSML7Ie3 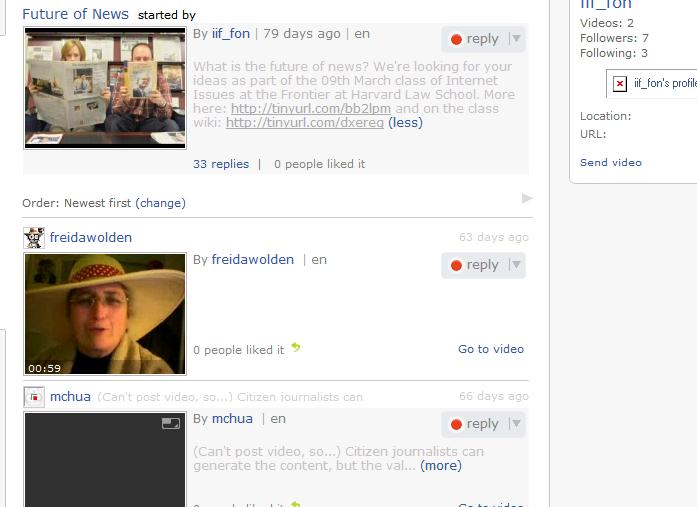