About TED Media and June Cohen

"TED stands for Technology Entertainment Design. It started out (in 1984) as a conference bringing together people from those three worlds. Since then its scope has become even broader. The annual conference now brings together the world's most fascinating thinkers and doers, who are challenged to give the talk of their lives (in 18 minutes)." [1]

"As Executive Producer of TED Media, [Jun Cohen is] focused on extending TED in new directions particularly those that help spread ideas. [She] led the charge to bring the conference online, launching TEDTalks in 2006, and the new TED.com in 2007. [She] also co-produce[s] the annual conference, manage[s TED's] talented media team, and continue[s] to look for new ways to spread ideas." [2]

We spoke with June regarding the use of technology at TED with an aim at using some of TED's ideas to facilitate further discussion of the use of technology for our class. Some of the ideas that emgerged included limiting laptop use to the back row, making webcast videos or edited versions available online to the public, using technology or other "icebreaking" methods to develop community among students, and finding ways to keep students connected between class sessions. 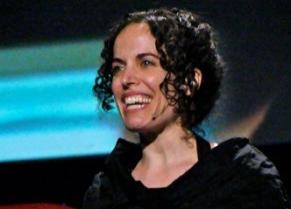 Before class, we told students that we would be discussing a few simple questions:

What sort of experiences did you expect from this course Tuesday-Sunday? What can those experiences be next time? What should those experiences be next time? What do you think about the idea of limiting computer use to those in the back row? Might this help us balance the usefulness of getting others involved in the discussion with the distraction it may pose to some in the classroom? Have you been sharing videos of our class sessions, available here, with your friends and family? If so, how has it enhanced your experience in this class? If not, do you think it might enhance your experience? Do you think more "icebreakers" would make the class more interactive? If so, when should they happen and what form should they take?

In order to prepare for the discussion, we asked students to do two simple things - and, as a bonus, you could do both of them when walking around Cambridge:

1) Listen to our 27-minute podcast with June Cohen of TED Media. The podcast can be downloaded, streamed, or accessed via RSS here.

2) Give a few minutes' thought to the above questions again and come ready to talk frankly about it on Wednesday morning.

We've since updated this page with thoughts that emerged from our discussion.

We discussed what happens to the videos from the class sessions after the webcast and whether it might be useful to edit them and make them available to the public. One student mentioned that she has shared the videos with friends and family members and has been able to discuss these with them afterwards. While not everyone will be willing to watch a 2 hour video, an edited version may reach more people and be beneficial to both the student and the public. Some discussed a concern about this, asking: to what extent are we trying to educate our attendees and to what extent are we trying to educate others outside the community? Some suggested that this could also be a great resource for law students when determining whether they want to take the class. The edited video could be a trailer for the class itself. Some suggested that making the class public does not take away from the experience but holds us accountable. It may also make the discussion ongoing. This would also make for a record of what we thought were the issues at the frontier when people look back years from now. An argument against making videos public is that it may keep some people from talking as much. The final idea advanced was a 10-15 minute video on Wikipedia for each class session. Each group could edit their own session or, alternatively, students who wanted to be involved in this process could register for an option of the class with more credits.

One student suggested that the content be posted on Wikipedia.com. Professor Zittrian said that the class did this before and, while it is still a good idea, Wikipedia doesn’t have a good way to sort this type of content.

The group seemed to agree that the class sessions did not involve enough time for discussion among students. We seemed to just touch on the surface of each topic. Many seemed to agree that it would probably work well to split the class into two one hour sessions each week, with the speakers at the first session and class discussion at the second session. This solution could also allow us to have a public session and a private session.

Many seemed to agree that the technology used at the beginning of the semester was a bit distracting. Most student presenters seemed to switch to no laptop policy towards the end. The question remains whether there could be a happy medium here.

At least one student seemed to appreciate some of the different interactive activities that some presenters used during class time, including the group presentations and negotiations. These are different ways of learning than are typically used at the law school and future classes may want to consider using these types of “technologies” in the future.