Difference between revisions of "Tools: Twitter in the Classroom"

What is Twitter? "Twitter is a social networking and micro-blogging service that allows its users to send and read other users' updates (known as tweets), which are text-based posts of up to 140 characters in length." [1]

In the year ending in September, visitors to Twitter rose fivefold to 5.57 million. Users include Britney Spears, Starbucks Corp. and Barack Obama. [2]

Twitter.com seems to reflect a vision of simplicity in the use of the tool as a means for people with previously established social ties to stay connected through the exchange of the ". . . quick, frequent answers to one simple question: What are you doing?" with the purpose of providing a timely way to send updates to those people who might find them meaningful: "family members, friends, and colleagues." The tool allows users to stay "hyerconnected" to friends or to stop following them at any time. It also allows users to set quiet times and boasts that it ". . . puts [users] in control and becomes a modern antidote to information overload."

Jack Dorsey conceptualized the tool around a simple status idea that would, for example, enable users to know what their friends were doing. He and his coworkers decided to build a prototype. "Obvious" [3], a creative environment in San Francisco CA, initially founded Twitter, with the first prototype being built in two weeks in March 2006 and being launched publicly in August 2006. Following its very quick growth in popularity, Twitter Inc. was founded in 2007.

"Twitter. . . is precisely what you want it to be. It can be a business tool, a teenage time-killer, a research assistant, a news source whatever." [4]

Politicians have been using Twitter, along with other social networking tools, to campaign and to provide updates to their constituents. [5]

Twitter is also changing the way companies do business. For example, some businesses use the tool to pitch services, provide important updates and respond quickly to the individual needs of customers. [6]

Twitter is being used to communicate news, often much faster than the news media. "When the last earthquake happened in California it was reported almost immediately on Twitter. It took about 10 minutes before mainstream media had the facts. Twitter broke the news about the New York plane crash and beat out the media by 15 minutes." As a result, some are crediting Twitter as being the first real threat to Google for getting information. [7]

Teachers are using Twitter to enhance the classroom as an educational tool. Uses by teachers include sending updates to students and encouraging (or requiring) posts by students when outside of class. Some who have used it for this purpose praise it for the ability to keep the conversation going when students are outside of class, allowing them to note their recognition of important concepts from their curriculum when they see them in context, and for building a stronger class community which results in more open and, therefore, better class discussions. [8] [9] [10]

People are using Twitter in ways that are probably beyond the scope envisioned by the company and its founders' simple concept of communicating status updates between acquaintances. It is being used to broadcast news faster than the mainstream news media, to connect politicians with their constituents, to connect businesses with customers and potential customers, and as a public relations tool.

Finally, and most importantly for our purposes, people are using Twitter to enhance the classroom experience. While others who about this use on the web seem to typically use the tool for communication while outside of the classroom, our class thus far has used it within the classroom for conducting an online discussion simultaneously with class lectures. We hope that our study of the experiences of others using Twitter as an educational tool, in addition to our reflection on its use in our class, will help us to provide useful information for educators and students looking to use Twitter to enhance the academic experience.

The class has used twitter – and specifically its hashtag capability, using the #iif hashtag – so far to form an impromptu chat room during class to facilitate discussion both among ourselves and, to some extent, others outside of this class (see here). Though there’s no reason the discussion cannot continue beyond class hours, in fact, essentially all of the tweets have come during the few hours of class time.

What have people tweeted about? With no attempt at ranking them in order of occurrence, here’s an informal and imperfect categorization. Are all of these valuable? Some? A few? None?

A. Further information or reading on a topic discussed in class.

E.g., When Professor Nesson was talking about the Eldred case, someone tweeted: “Lessig has a great article on losing the big one: http://tinyurl.com/yhp4s5”

E.g., "Davealevine: Fisher: ratio of statutory damages to actual damages is over 100,000 to 1. But @zittrain points out that $2.5k settlements are reality #iif"

E.g., "This is a great experiment: establishing a series of "back channel" conversations as law professors debate in front of us. HLS 2.0." Then: Is the point of the twitter convo to report the class to the world? or is to be a backchannel for raising questions?

E.g., “is it important that the statute was passed without any discussion? That Congress didn't think it warranted discussion?”

E.g., "gwbstr: @Dharmishta when I was in college we did that on a conference call... Far less open. Now my editor at the time is a twitfreak @ehelm #iif." Then: "cass_sunstein: @gwbstr #iif my old editor at the Harvard Law Record is now a speed freak. True story."

Video: Jeff Jarvis on the Next Technological Milestone [12]

Tame the Web: Libraries, Technology and People, “Twitter in the Classroom” [14]

We know we’re a bit late to the party, so all we ask for class is that you think about whether twitter in general and twittering in class in particular has been a net positive, neutral, or negative so far in the class. Would it be beneficial in more traditional-type classes? Do you think it generalizes to other settings – can you see lawyers, business people, or entrepreneurs twittering during meetings, presentations, or conferences? We’ll write-up what you have to say and post it here for posterity, and then others can edit or add to it as they see fit.

Feel free to also spend some time this week reflecting on both the substantive issues discussed and the tools used in our class sessions thus far; the hope is that you'll tweet some of your thoughts, insights, questions, or anything else that you think might be relevant to this question using the #iif hashtag. We'll see how an asynchronous "meta-discussion" about over Twitter participation compares to the Twitter discussions we have been conducting during class.

Jason and Michelle presented four main reasons why twitter may not be the perfect classroom based on the use so far in the class. The jury is very much still out: some thought twitter was Ã¼ber-distracting, while others extolled its revolutionary virtues. We'll keep track of the use of twitter for the rest of the class. Here are the initial claims and some potential responses:

3. Who the heck is everyone?

4. Why do we need to constantly refresh?

Example, Taken From a Portion of the Feed From the Free and Open Source Software Class Session

This iif twitter feed is an example of the kind of online conversation that took place simultaneously with the in class presentation. It allowed those who couldn't be at the in person presentation, like Cass Sunstein, to join the virtual conversation and allowed for students who may not have expressed an idea otherwise to do so in a different way. At the same time, some students found this distracting. During this class session, the conversation was projected on a screen at the front of the classroom, behind the speaker. 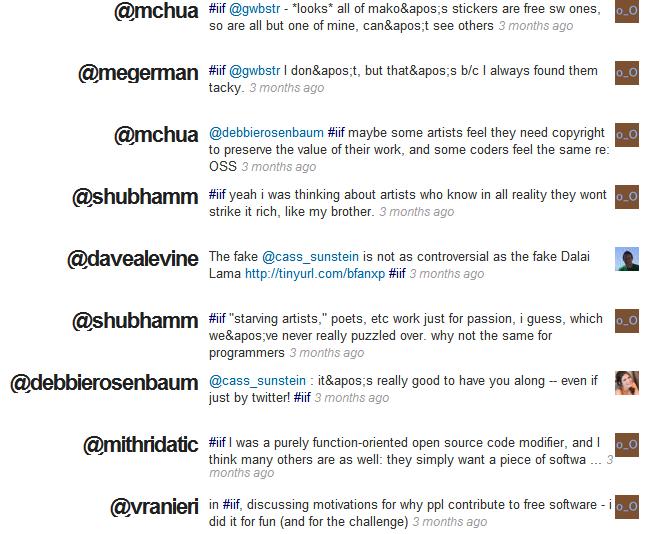