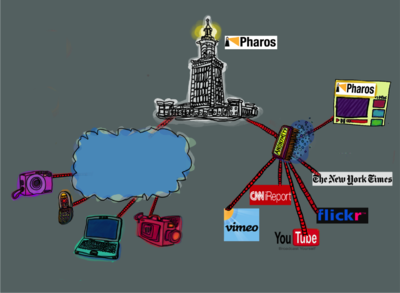 In addition to receiving human rights media, Pharos facilitates its publishing, which is depicted on the right-hand side of the “Pharos end-to-end diagram.”&#91;5&#93; Pharos can publish human rights media in two ways. First, Pharos has the ability to publish the media itself, and second, it can also work closely with existing organizations like YouTube and The New York Times to help with distribution. A real-life scenario could work as follows. A person records a small, peaceful demonstration on her mobile phone. Because YouTube is blocked in her country and the New York Times doesn’t deem the small demonstration to be newsworthy, she sends the video to Pharos, which publishes it on Pharos's website. Later, the government cracks down on the demonstrators, claiming that they are violent. But because Pharos has received and published this video, a record of the peaceful demonstration is preserved and later picked up by major news organizations, eventually including the New York Times.

No other organization enables human rights media in this way or this effectively. Using the framework developed in the Existing Services Section, hierarchical organizations that are profit-seeking, such as CNN and The New York Times, may choose not to publish certain pieces of media because they are not newsworthy. Non-hierarchical organizations that publish user-generated content, like YouTube and Facebook, may not filter media by newsworthiness, but as profit-seeking organizations they are susceptible to governmental pressures to take down objectionable content and identify offending individuals. For these reasons, Pharos must have the capability to publish human rights media on its own, since it neither filters content by newsworthiness nor is subject to governmental pressures in the same ways that profit-seeking entities are. On the other hand, non-profit organizations like Witness.org and Amnesty International do not have the resources or the expertise to enable technical solutions for exfiltrating human rights media. For this reason, Pharos must proactively enable such technical solutions for receiving human rights media. By building the two steps required to distribute human rights media to the world - receiving and publishing - into its mission, Pharos accomplishes what no existing organization can.

Pharos must be top-of-mind for those individuals that have a need for its services. Pharos can only combat the efforts of oppressive governments to chill free speech if the citizens of those oppressive regimes feel that they can effectively create and distribute human rights media without the fear of reprisals. To achieve this level of publicity, Pharos must actively promote itself, both through the mainstream media and by grassroots efforts. For example, Pharos should work with citizen journalists to spread awareness of Pharos “on the ground,” and should partner with human rights organizations like Amnesty International, Witness.org, and others.

While Pharos's anonymization services help to solve the suppression of human rights media, they are also susceptible to abuse. In order to remain credible, Pharos must monitor the content that it receives and publishes to ensure that it is consistent with the spirit of Pharos’s mission. This is an immensely challenging problem and a nearly impossible line-drawing exercise, but other organizations have attempted to tackle the problem. For example, CNN’s iReport Community Guidelines provide an interesting point of reference for unwelcome content:&#91;10&#93;

Deciding on what content is or is not acceptable will be an ongoing challenge (see Challenges and Critiques), and decisions will have to be made on a case-by-case basis. However, adopting a flexible set of guidelines like those adopted by iReport is a big step in the right direction.