In his article, Cyber Power Joseph Nye argues that barriers to entry into the cyber domain are so low that non-state actors and small states can play significant roles at low levels of cost. He points to three characteristics of cyber warfare, which distinguishes it from other kinds of traditional warfare: 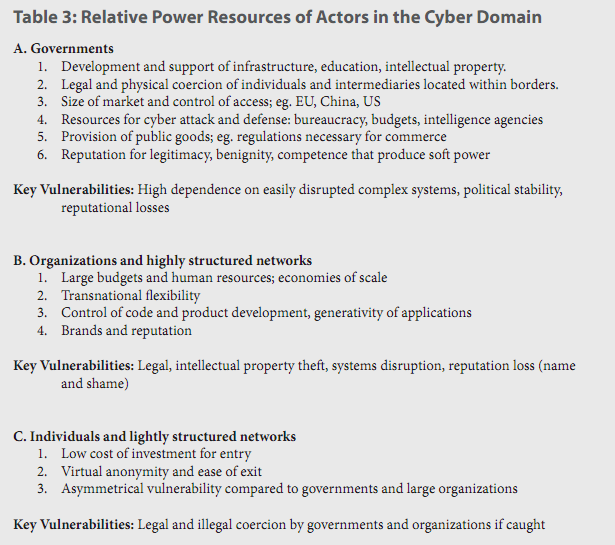 Providing security is seen by Nye as a classic function of government, and increasing insecurity is believed to lead to an increased role of government in cyberspace. Nye indicates four major threats that should lead in principle to different solutions:

General Clark's article, Securing the Information Highway, focuses on the problem of compromised hardware -- usually chips with rogue transistors built in that allow another party to gain control of a system. Clark believes this is the greatest threat for cyber security.

Knake points out that while the US have refused to cooperate at the international level on a new governance for the internet, China, Russia and other non democratic regimes have been organizing a united front to promote a new model for the internet, tightly controlled by states. According to Knake, a free and open internet is in the US’ national interest and therefore the government should actively fight the threats arising from cyber crime, espionage and warfare while at the same time preserving the democratic infrastructure of the web.

Knake suggested the creation of national level criminal laws and development of less formal mechanisms of cooperation through a “light” intergovernmental body. Knake's goal is a stronger international governance of the internet, but “tailored to specifically address a narrow set of security concerns surrounding crime and warfare”. An approach clearly opposed to Russia's and China's “information security”.

Knake suggests that it is now time to shift the focus of international and local attention from coordination and interoperability to security. The development of more secure technical protocols is much needed, Knake argues, and the government should provide guidance in the technical area. The private sector should be involved in a centralized forum established by the government to coordinate the internet governance agenda, including big US corporations such as Microsoft and Symantec.