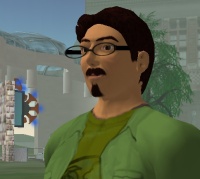 Cristos is an Extension School student at Harvard, where he's taking classes while deciding where to finish his Bachelor's. He spent three years at McGill University, pursuing his B.A. in East Asian Studies, Linguistics, and Psychology (not all at once, officially).

An early adopter by nature, Cristos first discovered computers at the age of 3 (on his parents' Mac Plus, before he could read). Since then, he's often been an active lurker in online locale-based communities, such as the b0st0n LJ.

This course, with its emphasis on communities in cyberspace (see Snow Crash [1], by Neal Stephenson), particularly appeals in that way. (The fact that Second Life looks like a video game doesn't hurt any, either.)

When he's not talking about himself in the third person, Cristos spends his time at a Cambridge-based company working on their website redesign. If he had any free time, Harvard Aikikai would probably take up the rest.